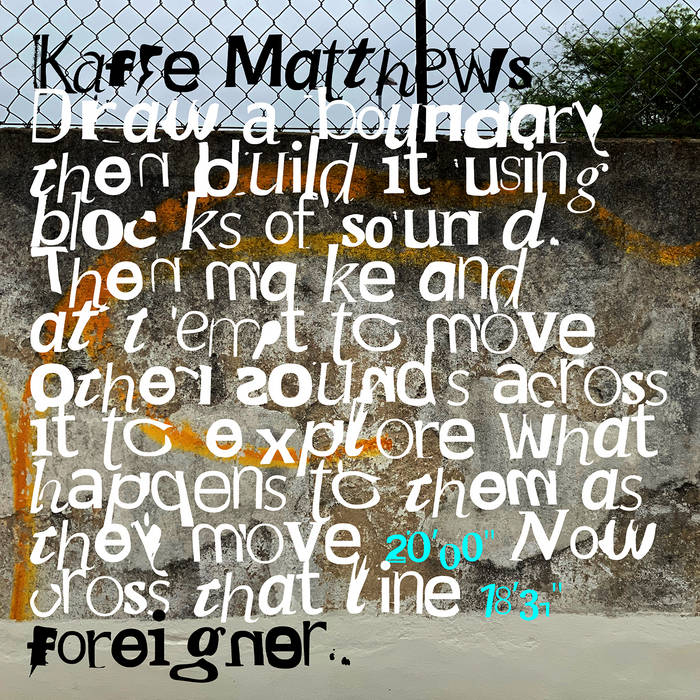 Objects Limited are proud to sign pioneering electroacoustic composer Kaffe Matthews' latest album 'foreigner'. Kaffe has a colourful background including a degree in Zoology, her architectural compositions working in the Galapagos with sharks to more recent work with sonic bikes and The Bicrophonic Research Institute. Her live performances and interaction with the listener are central to her work as documented in numerous solo and collaborative albums on her own label Annette Works since the nineties. Her many awards include a BAFTA (with Mandy McIntosh and Zeena Parkins), Distinction Prix Ars Electronica for her sonic bed and the first woman to have received the Edgar Varèse guest professorship in computer music at TU Berlin. Going back to the eighties, her job was assistant engineer in the early days of acid house music. She was cutting beats for Graeme Park of Manchester's Hacienda when a door opened with the realisation that the best bits are when things crash or lock up spewing super sounds, when the machines added their own input whether through error or experimentation from humans.

Now in 2020, after finding an Italian-made ELKA 400 electric accordion organ in a second hand Ghent shop some years ago, the time felt right for releasing music in a more traditional manner. This release marks the start of a series of releases, all using the ELKA organ in some way.

"foreigner A and B are made from a sonification of the word F O R E I G N E R. I was born British and even though I’ve had the privilege of living and working all over the world, I’ve never lived in another country for more than a few months. In 2017 I discovered by chance that Berlin offered me something I couldn’t find in London. At the same time I realised that even though this is still Europe, it was about time I became a foreigner. I learnt a little of what it’s like living in another culture with another language I didn’t understand and I struggled with the details of borders and different governmental laws to be able to live in another land... Now in Berlin, suddenly with the space to explore the ELKA whilst struggling with the practicalities of moving here, I decided to create the idea of a line, a random line drawn in space that clusters of sounds gather at and attempt to cross. What happens? Shivering bodies of ELKA notes do this well as each one is changed in presence and outcome due to what else is with them and when and where they are. This process also makes its own music that morphs into rolling landscapes and sculpture, shifting from movement to moments of stasis if you can but sit down to listen. Advise using full range speakers!”

Bandcamp Daily  your guide to the world of Bandcamp

Featuring Oakland sounds from the Smart Bomb collective and Samplelov.